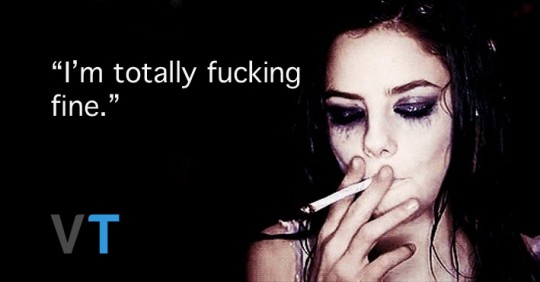 In a perfect world, people would say what they mean all the time. But in the real world, shit’s more confusing than that calculus class you took in college when your professor only spoke German.

Don’t get me wrong – some people speak their minds. But plenty of people take the more roundabout way. They say something and hope you pick up on the subtext. (Like when someone holds up three fingers and tells you to read between the lines).

Most men would argue that women are the worst when it comes to this kind of thing – the whole saying one thing and meaning another.

We’re tempted to say “…Ummm, as if,” but if we’re being honest, we have to admit that there may be sooooome validity to that claim. Just a teeny tiny bit.

Here’s a guide to 15 things all girls say, and what they really mean.

I’m actually about to set this fucking building on fire I’m so angry and you are an IDIOT if you don’t pick up on that.

Did that actually just happen? Tell me that didn’t just happen. You’d better open up that bottle of wine ASAP because it’s gossip time, bitches.

You better not go and you better not have fun, unless you want me to hate you forever. But, you know, no pressure.