Kim Kardashian is catching heat for having apparently posted Photoshopped images of her children to social media.

Popular celebrity Instagram account @celebface called out the editing. The account uploaded a paparazzi picture of Kardashian with children North and Saint, followed by Kardashian’s own altered version.

The alterations in the images are far more apparent in the gif sets posted by the account, which cannot be embedded here as it is set to private. However, Twitter user @diorpearls managed to pull the gifs.

What caused an outcry was not the filters and desaturation, but rather the fact that Kardashian appears to have made North look skinnier than the five-year-old actually is. Disapproving comments were along the lines of, “tf even goes through her mind” and “imagine photoshopping your daughter…yikes.” 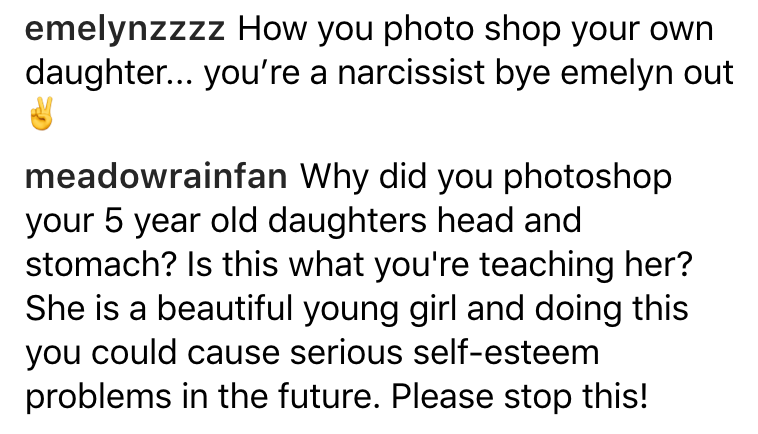 Kim Kardashian photoshopped her 5 year old daughter to look thinner. That family are a disease.

Joined in this apparent trend of Photoshopping their children is Real Housewife Kim Zolciak, who one week ago reposted a throwback portrait of her daughter Ariana Biermann—but this time, with her top lip clearly edited to appear larger.

Here is the original picture, posted nearly three years ago:

Picture on the wall in my house!! @briellebiermann @arianabiermann time has just flown by! ? #MySweet❤️s

And here are the two side by side:

Twitter user @mwazdhere pointed out how just this past week, Kim Zolciak edited an image of her 4-year-old daughter, Kaia, to give her the appearance of having a smaller nose and head, and a bigger butt.

well let’s talk about the fact she isn’t the only one to do that. (credit: @celebfaceINSTA) pic.twitter.com/JnHVmn03Jr

This isn’t the first time either of the Kim’s appeared to have Photoshopped their children. Last month, Zolciak posted a photo of Kaia and brother Kane where the two were made to look “skinnier,” whereas Kardashian has in the past Photoshopped daughter Chicago’s head to look smaller.