In a strange turn of events–as though Kanye West hasn’t given us enough to work with–Kim Kardashian is calling out her ex-boyfriend, Ray J, on Twitter as though it’s 2006 and there’s a sex tape on the loose.

For those who don’t know, Kim Kardashian and R&B singer Ray J dated for three years–from 2003-2006–creating a sex tape together. The tape was later leaked to the media and, according to some, was the catalyst behind the Kardashian claim to fame. After the tape was leaked, the family scored their hit TV show on E!, and Kim Kardashian soon became a household name.

For years since their split, Ray J has spoken about Kim in the spotlight frequently–like on Celebrity Big Brother last year, claiming Kim was a “player” and “cheated on him multiple times,” despite others saying he was a liar.

Now, Ray J is using his ex’s name some more to gain fame. The singer spoke to outlet The Sun about Kim and her “weird habits,” including how much money she spent on g-strings and sex toys. Ray J was quoted saying:

“Kim and I had fun times – marathon sessions. But she didn’t like getting sweaty and would stop to do her make-up if she did.

“She liked to look dope during sex, the right lighting, setting the mood. She was wild – there was a red Louis Vuitton trunk of sex toys.

She would order out for pizza, the only thing not working up a sweat was the Cristal cooled to 22 degrees… her mom would call and she would nearly always take it.

While their breakup was over 10 years ago, and Kim has three children with rapper Kanye West, Ray J still feels the need to cash out on her name–and, Twitter decided to call him out on it. One fan decided to pose the question as to why Ray J feels the need to reveal intimate details about Kim Kardashian all these years later. Kim Kardashian responded by saying Ray J is a “pathological liar” and the story was totally false. 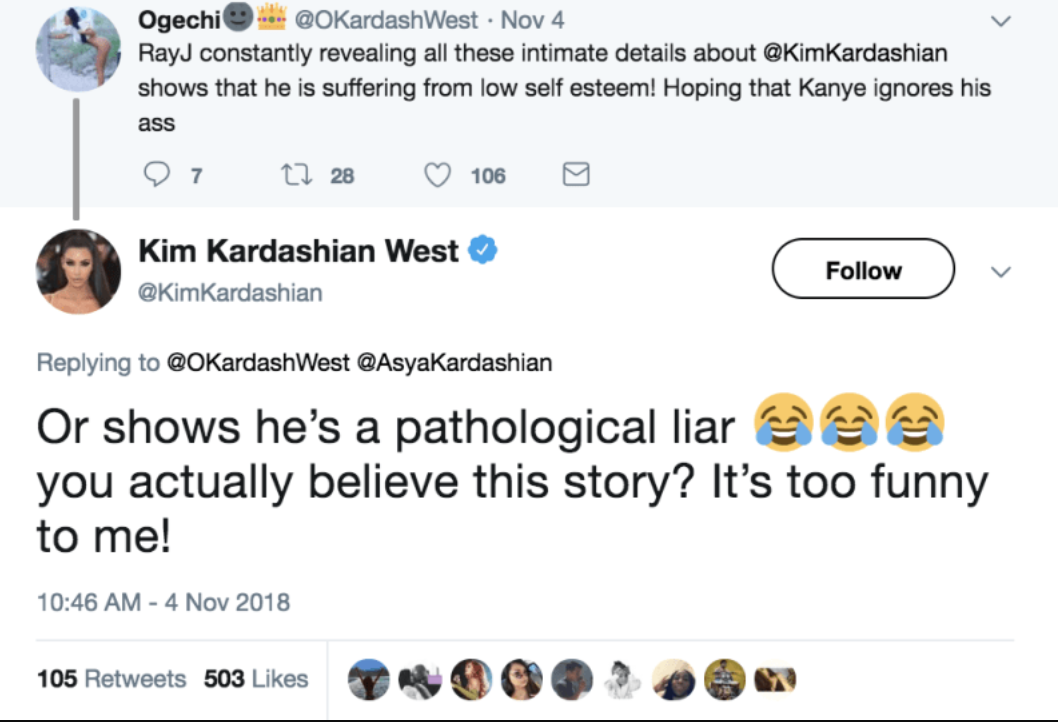 Others began to wonder the same thing online.

this why I don’t understand haters that say the tape made her success... like bruh Ray J been milking this shit for 10 plus years and STILL BROKE AND LAME. Kim is the most influential person on the planet. Like I’d hate to be Ray J girl bro. grow up @RayJ

Ray J still talking about sex with Kim after all the years. A married man. Smh.

At this point RayJ really just disrespectful for still talking about Kim like this... Jesus, she’s a married woman ... move the fuck on lowlife?? #myopinion pic.twitter.com/dNblrTyMpB

Having sex with @KimKardashian was Ray J’s biggest accomplishment....
N^gga can’t stop talking about it.. pic.twitter.com/xqUUZ8L6Ij

Ray J is actually dumb. Why is Kim K’s name still in his mouth after over a decade, as if he doesn’t have a wife and a child that he should be focus on and boasting about? He’s even sharing intimate details. Does he not have any shame? ??‍♂️

My question is–what does Ray J’s wife think about him always keeping Kim Kardashian’s name in his mouth? Let me know, homie.