Since phone numbers were invented, women have been figuring out ways to avoid giving their to creeps. Unfortunately, as technology has evolved, it’s gotten harder to give a fake number. A guy doesn’t have to go all the way home to call you now—they can check right in front of your face!

This means woman have to get a lot savvier about how they avoid offering personal information to some weirdo at the club who won’t leave until he gets those digits—and it includes a fake voicemail account.

Tumblr user daree-to-dream posted some very wise advice that went viral and is now circulating again on Imgur. Apparently you basically have to be a secret agent now to avoid bad men: 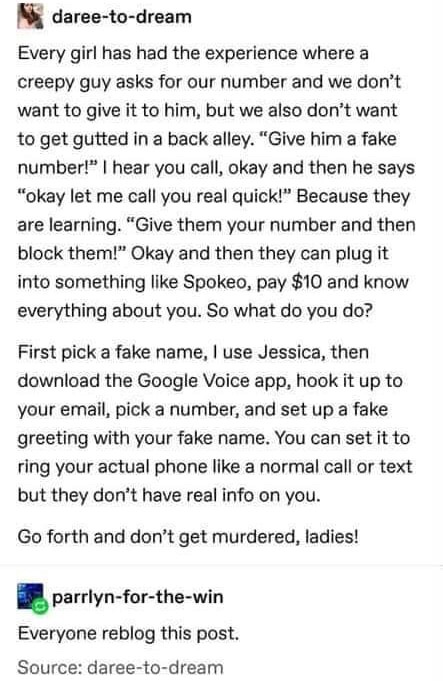 Her post basically details how to set up a fake voicemail account with a fake number, greeting, and name. It reads:

“Every girl has had the experience where a creepy guy asks for our number and we don’t want to give it to him, but we also don’t want to get gutted in a back alley. “Give him a fake number!” I hear you call, okay and then he says “okay let me call you real quick!” Because they are learning. “Give them your number and then block them!” Okay and then they can plug it into something like Spokeo, pay $10 and know everything about you. So what do you do?

“First pick a fake name, I use Jessica, then download the Google Voice app, hook it up to your email, pick a number, and set up a fake greeting with your fake name. You can set it up to ring your actual phone like a normal text or call and they don’t have real info on you. Go forth and don’t get murdered ladies!”

I’ve never heard of Spokeo, but it looks like creeper tech is at an all-time high. A lot of people in the Imgur comments seemed pretty shocked that anyone would go to such lengths to avoid handing out their number, or that women think about being murdered by random guys at all. We do. It’s a real bummer.

Some guys offered the helpful hint that if you’re really into someone, give them your number and they’ll text you if they want to.

Other women came in with much more specific advice about the ways they protect themselves, including someone who updated the original post to say, connect that Google number to a dummy Gmail account! They could still Google the number and find you, if it’s connected to your regular email. The more you know.

Use tech, use boogers, use herpes, use whatever you gotta to get out of these situations. For the record, I don’t think it’s terrible to try and approach someone at a bar and say hello, but read the vibe. Persistence is no longer considered charming.

And yes, it is of course the responsibility of creeps not to be creeps, but when has a creep ever voluntarily not been one?