Cheaters can only get away with their duplicitous behavior for so long; it always catches up to them. Google “cheaters always get caught” and check out the amount of quotes attesting to this fact. And it’s becoming more and more true with each passing day. Technology has made it nearly impossible to be sneaky in a relationship.

In fact, the most insane public cheating stories of the year were all made possible because of technology. As author Arthur C. Clarke once said, “Any sufficiently advanced technology is equivalent to magic.” I’d call getting out of a toxic relationship with a lying, cheating partner as quickly as possible pretty magical, wouldn’t you?

Over the summer, Twitter user @alexxiisj was standing in line at a taco stand when she overheard a guy bragging to his friend about how he was cheating on his girlfriend, a Dallas nursing student named Hannah.

dear Hannah the nursing student in Dallas, i heard ur bf @ the taco stand this morning, talking about how many times he’s cheated on u since he’s been back at baylor……… he’s trash. dump him.

The tweet quickly went viral and, against all odds, the correct Hannah caught wind of what happened and did what needed to be done.

I dumped him, just to update everyone https://t.co/9PJ9GpmzV5

2. The Bachelor In Paradise tweets:

Jordan Kimball (Bachelor in Paradise) was in for a big and unfortunate surprise after getting engaged to Jenna Cooper. Just days after he proposed on an episode of the show, cheating rumors involving Cooper and an unidentified man began popping up online.

Just before the BIP finale aired on September 11, TV writer and podcaster Reality Steve posted text messages from a man who claimed to have had a relationship with Cooper before and during her engagement to Kimball. Though Cooper denied the allegations, People reported that Kimball believed the rumors.

And even Jordan is saying she hasn’t exactly denied it. This wasn’t fun for me to report. I feel bad for Jordan & you can tell by the interview, he was blindsided by this and basically doesn’t know what to think or how to act. I’d be shook too if I were him. Who wouldn’t be?

The text messages, which Reality Steve posted to his blog, are very relationship-y and allude to a sexual relationship between Cooper and the anonymous man. 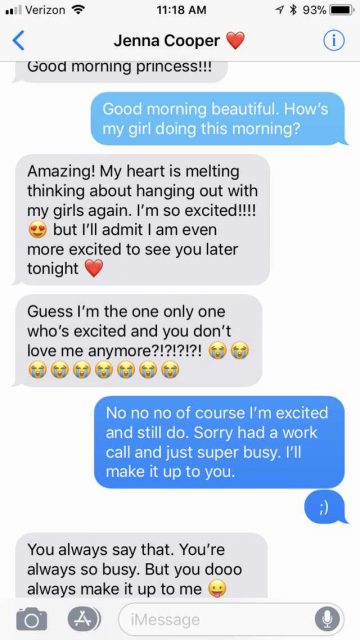 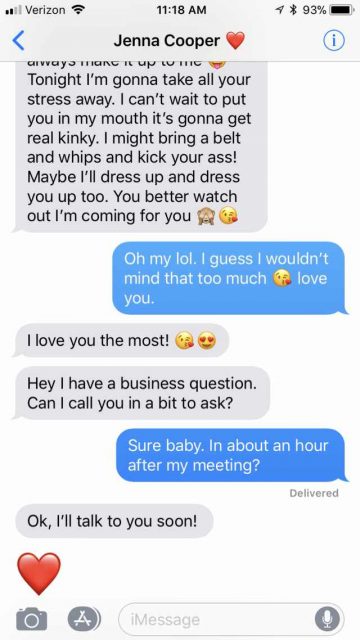 In the final screenshot posted by Reality Steve, Cooper mentions the engagement episode of BIP and writes, “I keep telling you that this is all for my business…You know how much I need the money” and explains that “Me and Jordan aren’t together for real. I don’t even like him let alone love him.” 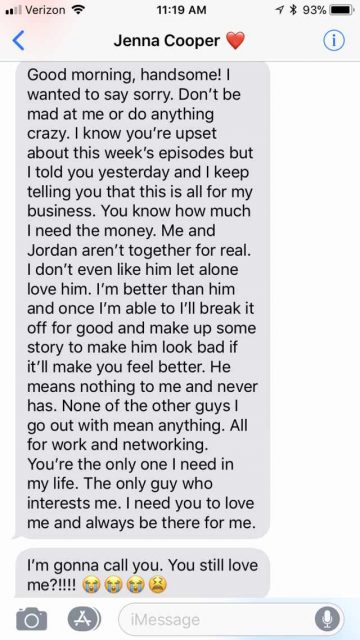 The next day, Kimball took to Instagram to announce that he called off his engagement to Cooper. “I’ll be taking time to pursue my inner peace and she will always have me to talk to, if you’ve reached out to me, allow me time,” he wrote.

To think, to feel, to fall. These emotions interact with experiences and people, when you find a person you think about them, you feel when they feel and sometimes you fall. When you’re in love with even the experiences you’ve had with them it’s something to respect. Being careless with someone that you give your heart to and reach milestones with isn’t sensible no matter what the terms may be. I have not had an easy life and having struggles allows me to grab onto tough times and discard them from my path. I deal with unreasonable circumstances reasonably and have come to terms with a decision to remove myself from the relationship, it breaks my heart to think, feel and fall for this. It’s dropped me. Fumbling emotions and being understanding is not easy. I’ll be taking time to pursue my inner peace and she will always have me to talk to, if you’ve reached out to me, allow me time. Thank you to those that have.

Yulia Agranovych found out her husband was cheating on her after seeing the view from her own bedroom window on a random woman’s Instagram. Scrolling further down the woman’s Instagram, she found a selfie the woman had taken with Yulia’s husband Nazar Grynko captioned “Beautiful view from my husband’s bedroom.” 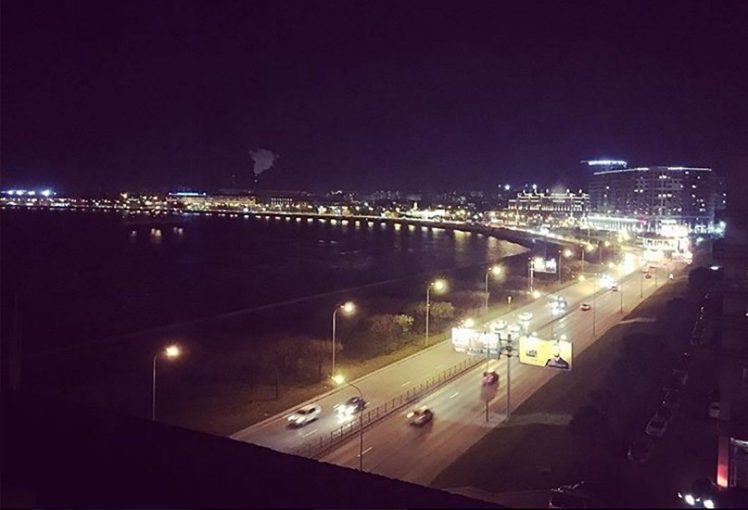 There were a ton of pictures of the two together on the woman’s Instagram page, but Nazar denied everything. He eventually admitted that he had been cheating, though maintained he’d never been “mentally unfaithful” because he had “told every girl he was married” (yes, there was more than one).

On the bright side, Yulia’s story inspired many others to leave their scumbag partners. “Many women supported me, posting that they were proud of my bravery, that I openly discussed it with irony and sarcasm, so now they are ready to get rid of their unfaithful men too,” she said. 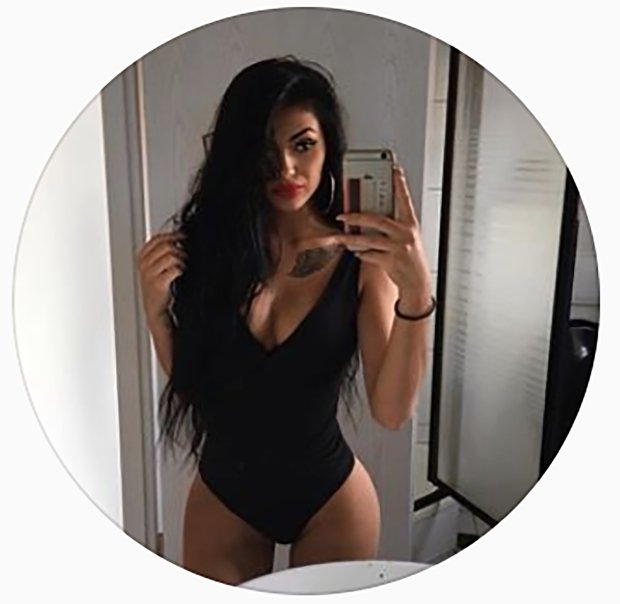 And as for Vlada Abramovich, the woman Nazar had been cheating on Yulia with? She was utterly unapologetic, writing “She is his wife, not mine, what’s the problem? Is he just a vegetable without free will? Don’t make me laugh.” She’s got a point. 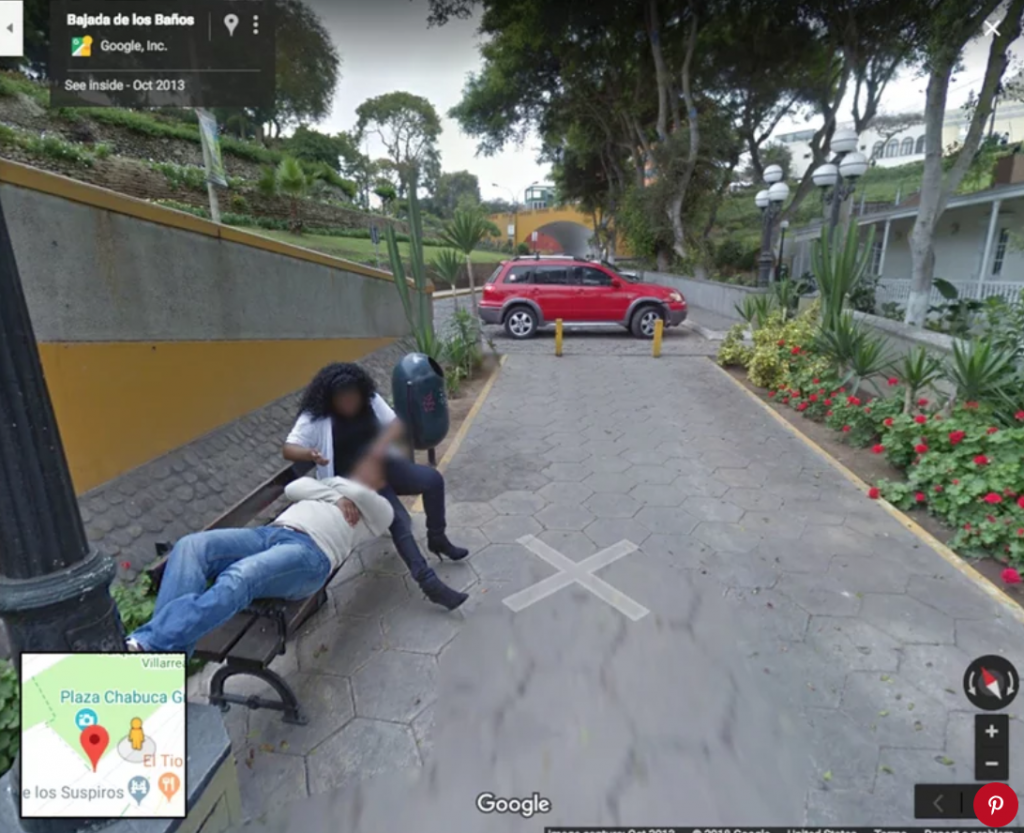 A man caught his wife cheating while navigating the street view function on Google Maps. According to Australian outlet News.com.au, he was using the app to check out vacation destinations in Peru when he spotted a woman wearing an eerily familiar outfit.

Scrolling through the Bridge of Sighs in Barranco, Peru, he saw the woman sitting on a bench, stroking a man’s hair as he reclines in her lap. Despite both their faces being blurred—as is customary when Google street view captures a person—he recognized his wife’s clothes and physical characteristics immediately.

Peruvian newspaper La Cronica reported that the wife admitted to cheating, and the couple recently divorced.

A woman named Jackie got caught cheating through a series of sexy texts. Jackie went on a business trip to Atlanta. Alone, or so her boyfriend thought. When she got to her hotel room, she sent her boyfriend a sext to show him just how much she missed him. 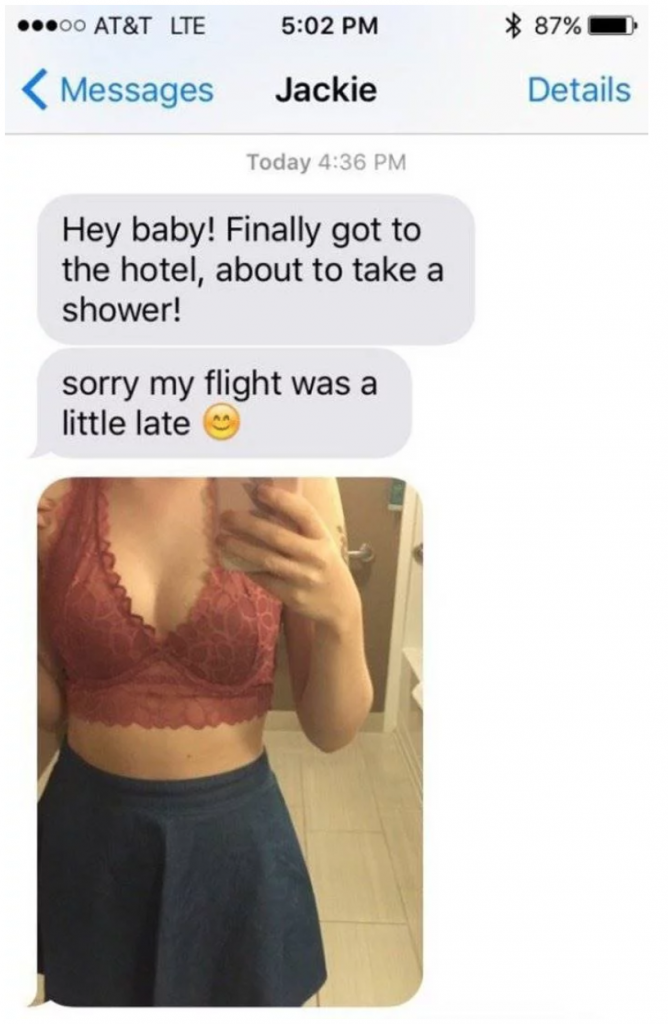 Everything seemed to be going fine until Jackie’s boyfriend spotted an unfamiliar striped suitcase in the corner of her sext. 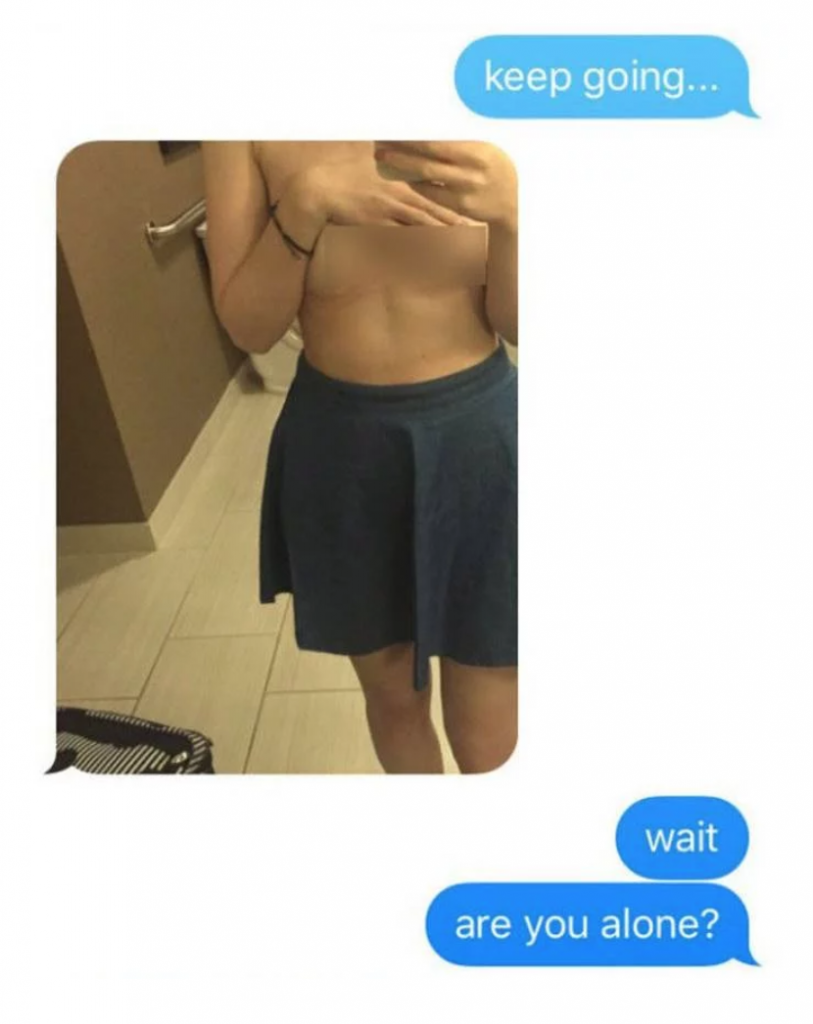 When she realized her mistake, Jackie sent a more naked photo, which she captioned “LOL.” 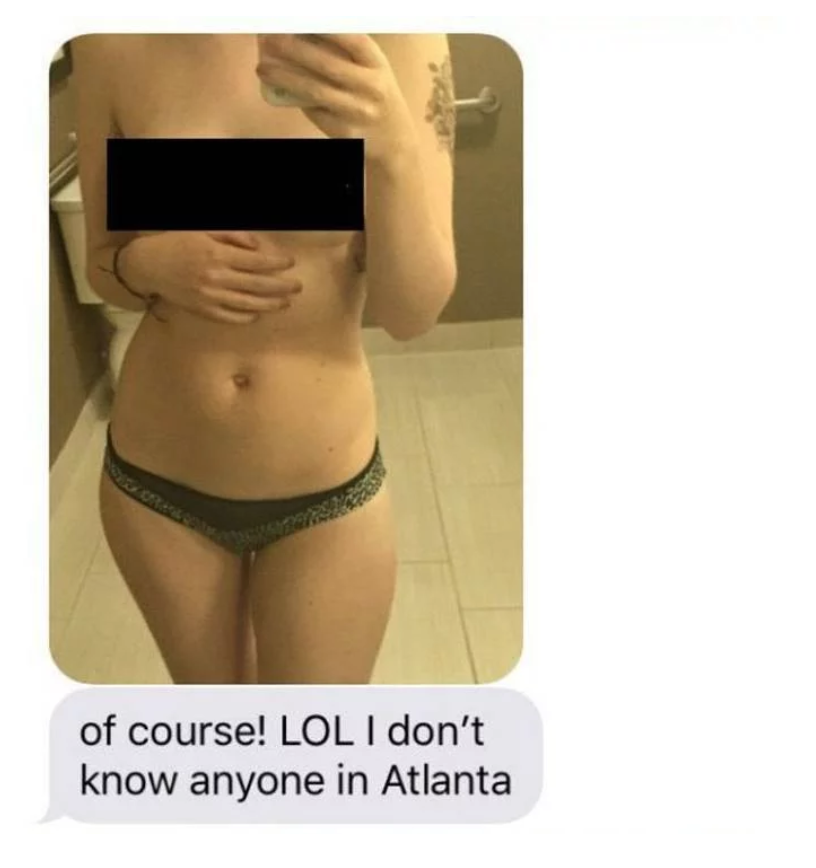 Jackie gave her boyfriend her hotel room number as evidence. But instead of asking the hotel concierge to connect him to room 1422, Jackie’s boyfriend asked what room she was staying in. When her name didn’t come up, he instead asked for her boss, Tom. 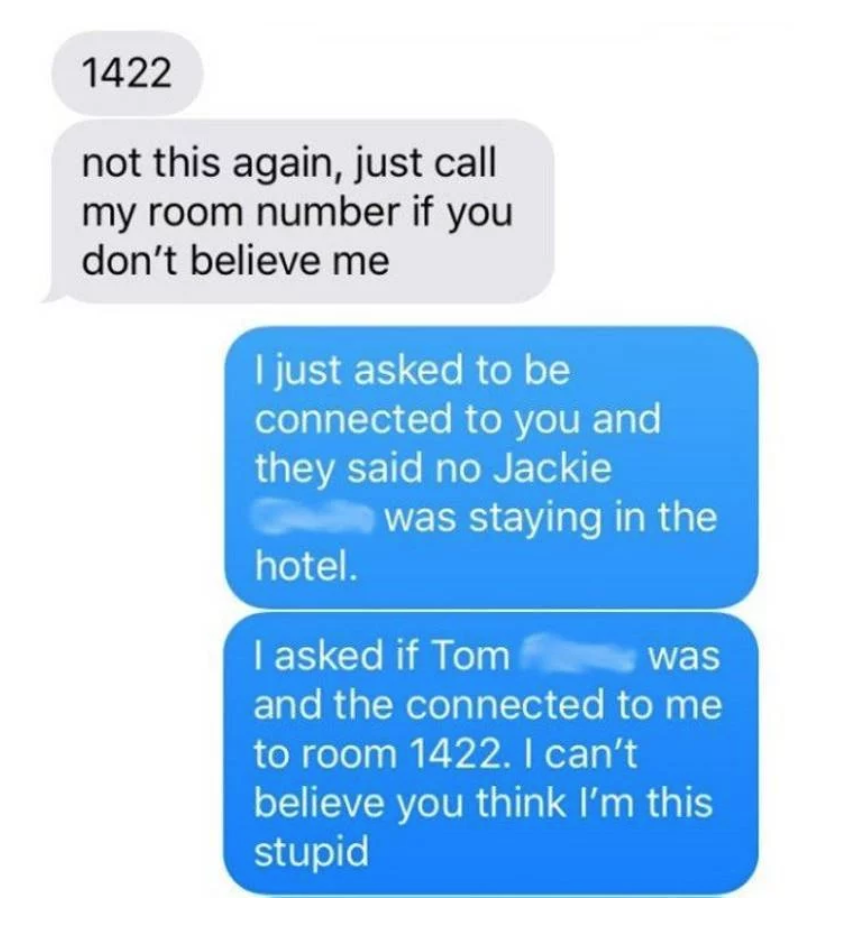 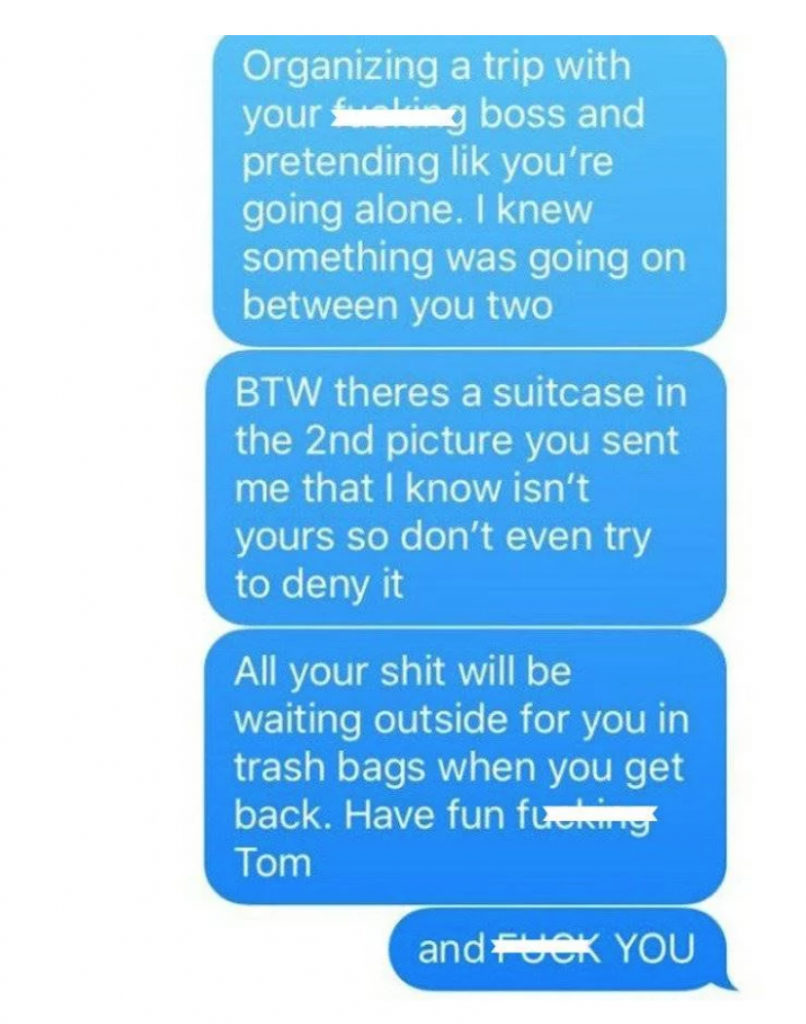 Serves Jackie right for sending her boyfriend nudes while cheating on him with her boss in a different city.